Why we are trading presents for experience this holiday season 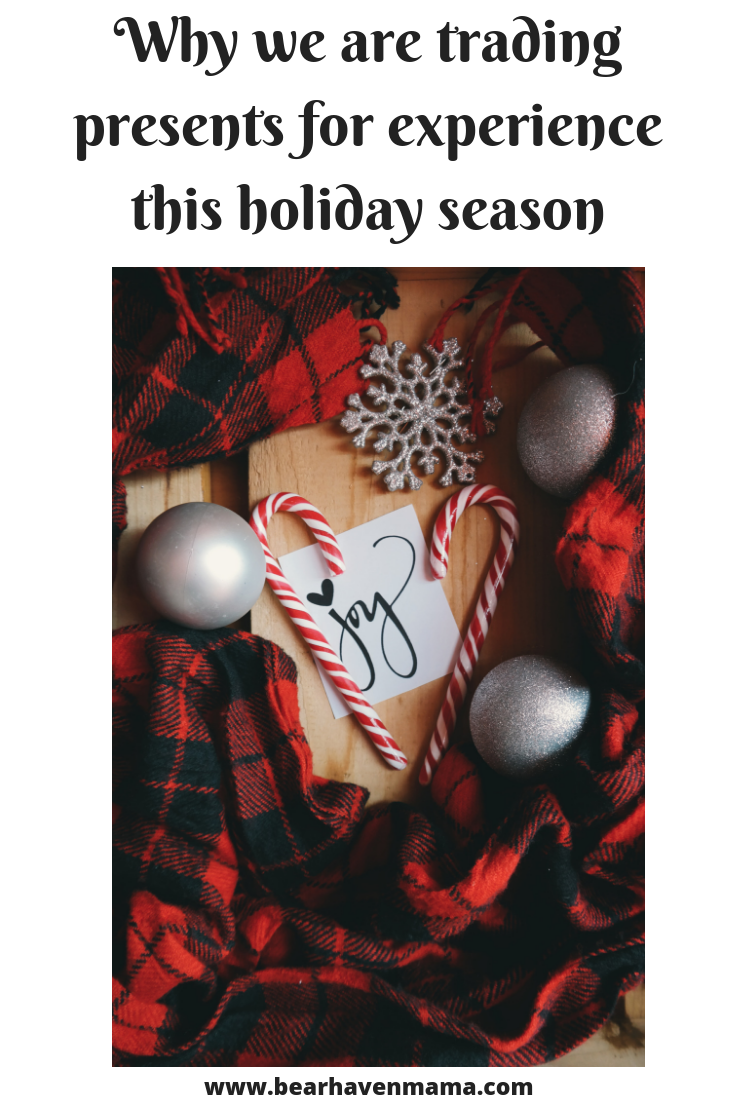 With the holidays approaching, we decided to change how we celebrate in a big way. We celebrate Christmas, and while the older two kids are past the Santa phase, the youngest is just now at the point where she is getting excited about Christmas and Santa and presents. However, with this change in dynamics, we saw this as an opportunity to do things differently this year.

Let me back up a little bit. Over the last few months, we have been going full steam ahead on home projects, and one of those has been organizing our basement as well as the kids’ rooms. As I have mentioned earlier, when we moved here three years ago, we cut our square footage almost in half. With me having a chronic illness before, during, and after the move…well, let’s just say the chief organizer in the house has been out of commission. When we moved here, we moved twelve years of kid stuff, memories, furniture, and some of what used to be in my store to this not-so-large home. Then, because I was sick, we put most of it in the basement, crowding the laundry room and making the workshop down there unusable. Also, I couldn’t find important boxes because we just had so.much.crap.

Fast forward to this summer, where I got this bright idea that I wanted to take the toy room that no one used (as in they would take toys from that room but not play in that room) and turn it into a dining room. I moved the homeschool stuff to where our eat in kitchen was. It has turned out beautifully, and I will share more about that in another post. However, it meant that those toys had to go somewhere. We decided to put them in the girls’ room with the girls. While their room is a decent size, it still took a few trips to Ikea to find just the right shelving and storage solutions for their room. Between the basement and their room, it really got me thinking, “How can we cut down on all this stuff?”

Then I started seeing all those posts that come out about this time of year about the Four gift idea…You know the one that says, “Something you want, something you need, something to wear, and something to read.” It made the wheels start to turn so that when the big kids brought up the subject of vacations for the millionth time, I decided that maybe we should try approaching the whole gift thing a bit differently this year.

This really is the perfect year for it in our family as we are starting new points of life with some of the kids. Having fewer presents for Crankles means nothing to her. She doesn’t remember much about previous years. To be honest, she doesn’t really even care. She thinks Santa is bringing one thing. Granted, she is also the kid who did not expect anything for her birthday and was almost offended that we got her presents for her birthday. Can I just say that I really love that kid! With the older two, they are winding out of the toy phase and are not sure what they want anyways. When I presented the idea of cutting my Christmas budget in half in favor of taking a mini-vacation, the older two kids happily hopped on board with the idea!

So while we are not going with the whole four gifts thing, they will be getting a few small gifts and possibly some sock. We also embraced the idea of less material things in favor of experience and memories. We love taking vacations together and have a lot of good memories of past adventures. I know this idea might not be for everyone, but it is something to think about especially if you don’t want to purge your home every holiday and don’t want to add a lot more presents that may or may not get played with after the tree comes down.

This year we are making a change, and I am hoping that when we look back at all of this, we have a lot of fun memories of the things we did and that we were happy.

6 Comments
Share
Tags: experience over material, four gifts for christmas, how to cut down clutter, minimalism for the holidays, minimalism with kids

On the subject of Grief, Miscarriage, and Fertility