Today was the day when reality finally set in… 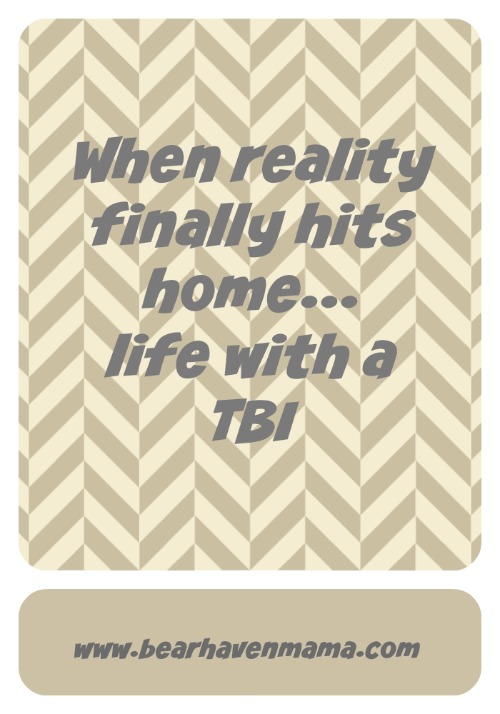 I like to play this game sometimes called, “Even though the doctors are diagnosing and telling me things, maybe everyone who kept telling me over the years that I was just making stuff up was right, and nothing is really wrong with me.” It is a stupid game to be honest, and I think the only reason I do it is because I struggle to wrap my head around all that is going on right now.

You may have noticed that I am not writing much right now. It is summer, and I know some people take the summer off from blogging. However, I am not one of those people. If we all want to be honest here, my writing has been somewhat sporadic for two years, ever since I landed in the hospital from having symptoms of a stroke. I was told it was not a stroke. I followed up with the world’s worst neurologist. Then before I could get a second opinion, my husband lost his job, and well I only ended up being able to start getting the ball rolling again this spring to find out just what is wrong with me.
I have a brain injury. I have probably mentioned this a few times over the years. I was hit by a car. Even though it was not my fault, I basically got screwed over majorly. I worked really hard trying to keep myself literate and even taught myself how to build a website, build a business, blog, and do social media. I worked really hard, and it all fell apart again when I ended up in the hospital two years ago.
I have been having some issues lately, and I seem to have some good doctors figuring things out now. However, it is hard on the kids. My almost three year old has become super clingy, and when I see her playing with her dolls, it is often the scenario that Barbie has to keep going to the doctor.
Today, she and I started having a conversation about how Mommy is sick. I told her I am not sick, but that my brain has a boo boo. Later, she hurt herself, and I looked her over and then gave her boo boo a kiss. I told her that it helps make things better. Soon after, my child took her hands and placed them on my face. She told me that she needed to kiss my head to make me feel better. I tried hard not to cry. It hurt so freaking bad. Why should my almost three-year old be worried about her mommy? Mommy is supposed to take care of her!
As the day progressed, suffice it to say that I ended up having an experience that made everything I know about what is going on with me right now seem very real and kinda scary. I do not feel like going into details just yet because I don’t want to share everything I have been told just yet. Part of me is hoping that my neurologist will have some light to shed on things, and I am seeing her next month. All I really want is for someone to fix me.
However, tonight, I am sitting here kinda scared and angry too. Fifteen years ago, I was hit by a distracted driver. With social media and texting, distracted driving seems to almost be a norm nowadays, and lately when I see it, I just want to scream. I think part of me is still angry at the woman who hit me because she gets to live her life, and here I am constantly giving up my dreams and also trying to downplay things because I don’t want my kids, my family, and my friends to worry about me. I am scared. I am scared because I want things to be organized. I want to be able to plan and do. Right now, I feel like I am staring into a big, dark void. I want to try to stay positive, and lately I am really struggling with that.
With all of this in mind, I have decided that I need to take these feelings and let them out, so here we are because I know that somewhere out there someone else probably feels the same way, so if nothing else, here I am saying you are not alone. And if nothing else, writing always makes me feel a bit better. I have not been writing much though. It has been so hard to sit and try to make the words come alive because I want to say things, but I don’t want your pity. I just want to get it out and tell my story.
So right now, this is my story. Life kinda sucks right now, and I am a bit angry. I have no words of wisdom, but I feel better now that I actually have said what is on my mind. What is on your mind right now? Feel free to share in the comments below or join the discussion on Facebook!